Meru University of Science and Technology 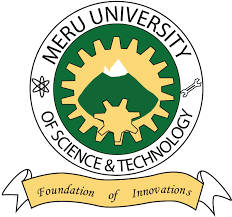 The idea of establishing a University dates back many years to the early 1960s when the Njuri Ncheke (Council of elders of the Meru people) conceived an idea of establishing an institution of higher education in Meru. It was in the mid-1960s soon after Kenya’s Independence that the elders initiated the process of establishing the institution. The idea was first floated to the government at a time when it was interested in training the youth of the nation in order to equip them with skills in various technical fields to enable them work in the upcoming industries and other sectors that required qualified manpower and also to meet local and national economic developmental needs. Meru College of Technology (MECOTECH) was therefore one of several institutions suggested by the Government.

Meru University of Science and Technology (MUST) was established as a full-fledged University following the Award of Charter on 1st March, 2013. Subsequently, Dr. James N. Mwangi, CBS was appointed the first Chancellor.

MUST Main Campus is situated 15km from Meru town along the Meru-Maua road. The University has also opened a campus in Meru Town at the Hart Towers and a learning centre at Marimba.
Since its inception, Meru University of Science and Technology has continued to play a leading role in the development and expansion of opportunities for higher education and research. This indeed is the culmination of a process that has seen the University achieve tremendous growth in curriculum development, staff capacity development, student enrolment, infrastructure development as well as research and collaborations.

In pursuit of our mission to provide Quality University education, training and research in Science, Technology and Innovation, the University has successfully implemented the Quality Management System and was the first University in Kenya to be awarded the ISO 9001:2015 certification.