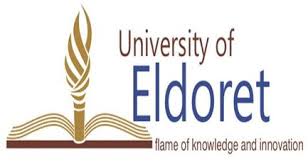 The University of Eldoret is situated approximately nine (9) kilometres along the Eldoret-Ziwa road from Eldoret town, Uasin Gishu County. It was founded in 1946 by the white settlers as a Large Scale Farmers Training Centre. In 1984, it was converted to a teachers’ training college and renamed Moi Teachers’ Training College to offer Diploma Science Teachers Training. Due to the double intake crisis, the College was taken over by Moi University in 1990 as a Campus and renamed it Chepkoilel Campus offering natural, basic and applied science programmes. In August 2010, through Legal Notice No. 125 of 13th August, 2010 the Campus was upgraded into a University College with the name Chepkoilel University College, a Constituent College of Moi University. Upon the award of Charter by the President on 11th February 2013, the University College has renamed University of Eldoret.

The University is Science, Agriculture and Technology based and has grown steadily from the initial Schools of Forestry and Science to the current 9 schools with 34 academic departments and a student population of above 14,000. Teaching and non-teaching staff number over 1,300. In addition, the University operates 2 Nursery schools, 2 Primary schools and a Secondary school. The total University acreage is 1,054, part of which is set aside for agricultural production.